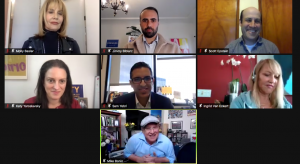 Election Day arrives in just over three months, and much of the attention in Los Angeles is focused on the mayor’s race. Yet there are other significant contests on the ballot, and voters in eight City Council districts will elect someone to represent them for the next four years. It’s hard to overstate just how important the gig is: While crafting laws and setting policy generate headlines, councilmembers also must deliver community services to more than a quarter-million constituents.

In the run-up to the June 7 primary, Los Angeles is looking at individual council contests. This week, the focus is on District 5, one of three open seats.

The Westside territory contains some of Los Angeles’ wealthiest neighborhoods, including Bel Air, Beverly Crest and, in the eastern part of the district, part of Hancock Park. The boundaries were tweaked in the recent City Council redistricting process, and neighborhoods in the San Fernando Valley were removed, and some communities along Wilshire Boulevard were added. The Fifth also takes in Fairfax, Melrose and Westwood. Landmarks include UCLA, The Grove, LAMCA and the Playboy Mansion.

According to data used for the redistricting process, the Fifth has approximately 275,000 residents, with the voting age population identified as 16% Asian, 11% Latino, 5% Black and 66% “other” (presumably mostly white). A 2016 economic analysis of the territory (again, pre-redistricting) found that 95% of area residents 25 and older had at least a high school diploma, and that the district boasted an average wage of $82,200, stemming partly from the legal and business center of Century City (which remains part of the Fifth).

People who get this job tend to keep it for a long time—there have been just six council reps in the last 69 years. Past officeholders include Roz Wyman, who as a 22-year-old in 1953 became the youngest person to join the council, and the second woman (Wyman later played a key role in bringing the Dodgers from Brooklyn to Los Angeles). Zev Yaroslavsky held the seat for two decades before becoming a County Supervisor, and City Attorney Mike Feuer started his political career by representing the district. Current rep Paul Koretz won the seat in 2009 and was re-elected twice. He is termed out and running for City Controller.

Nine people have filed papers with the City Clerk in the effort to get on the ballot, but a few candidates stand out. That starts with attorney Sam Yebri, who is seeking to become the first Iranian-American elected to the City Council. He has been a fundraising phenom, pulling in $683,000 through Dec. 31, the highest total of anyone seeking any council seat in the city (including incumbents). His endorsements include Supervisor Holly Mitchell and the L.A. County Business Federation.

Katy Young Yaroslavsky (the daughter-in-law of the former politician) has raised an impressive $508,000, and is pushing her environmental experience and work as a deputy to County Supervisor Sheila Kuehl. Kuehl has endorsed Yaroslavsky, as have Wyman, mayoral frontrunner U.S. Rep. Karen Bass, and the L.A. County Federation of Labor, AFL-CIO. Jimmy Biblarz has described growing up poor in the district, with his family evicted from a duplex. He went to Harvard—he mentions the school four times on the bio page on his website—and is now a lecturer at the UCLA School of Law. He has raised $152,000, including a $37,000 loan to his campaign.

Two other candidates have raised lesser amounts but are active. Scott Epstein ($55,000 raised) touts his work as a social sciences researcher and his time on a neighborhood council, as well as founding a community group that helps people experiencing homelessness get support services. Molly Basler ($32,000 from donors, and another $15,800 in personal loans) came later to politics, and bills herself as a grassroots organizer.

The five leading candidates came together for a Feb. 26 Zoom forum hosted by the West L.A. Democratic Club, and moderated by, surprise, District 11 Councilmember Mike Bonin. It was a wide-ranging and informative affair. The chat box was nearly as interesting and busy as the speakers, and by the end attendees were roundly slinging praise at their preferred would-be pol.

Biblarz and Yebri had the strongest performances, both coming off as personable, engaging, and up-to-date on the nuances of the issues facing the community. Epstein appeared capable and with applicable experience on community issues. Yaroslavsky showcased a lot of knowledge and ideas, and touted connections that would help in the job, but she also sometimes seemed distracted. Basler frequently fell back on clichés.

The event was revealing but, like everything on Zoom, two-dimensional and limited. Anyone can and probably does resonate differently on the campaign trail.

Homelessness is the biggest topic in Los Angeles in 2022, even in an affluent district. The subject dominated the first part of the forum. The candidates all professed pretty much what everyone does these days—displeasure with the city for the state of the streets and the challenges faced by unhoused Angelenos. They uniformly called for speeding up the process of building permanent supportive housing while lowering the price of projects, and dedicating non-police resources to help those living on the streets and suffering from mental illness. There were calls for preventing people from slipping into homelessness.

The biggest point of discrepancy concerns what is known as 41.18, a city ordinance that seeks to prohibit people experiencing homelessness from camping, sleeping or lying in certain sites if there is advance notice and they have been offered housing and services. Yebri is the lone candidate clearly in favor of 41.18, saying during the forum that it can work when it is “part of a broader strategy coupled with street services, coupled with a credible offer of shelter.” Epstein, Basler and Biblarz opposed it, with Biblarz remarking, “It does nothing to get people into housing.” Yaroslavsky seemed to seek a middle ground, calling it a “political red herring,” and saying both, “It’s not going to solve homelessness,” and, “If it’s paired with deep social work and street engagement, it could be a helpful tool.” Yebri took a swing at her, saying he wasn’t sure of her stance.

A related issue was housing, with each candidate lamenting the limited number of units built in the Fifth in the past 30 years, leading to a dearth of affordable residences. “It’s a moral imperative that we reverse decades of exclusionary zoning by building more housing in CD5,” said Epstein.

Also of importance is transportation, particularly the possibility of a subway stop on the campus of UCLA. All the candidates supported building one.

The politicking has been steady for more than a year. Now things are about to kick into high gear. The fundraisers will continue, and with city matching funds soon to be allocated, mail should start rolling. Expect Yebri and Yaroslavsky to inundate district mailboxes—at the end of last year, Yebri had almost $500,000 in cash on hand, and Yaroslavsky had $405,000. There’s no reason to save even a dollar.

If anyone gets more than 50% of the vote, they become the councilmember-elect. But if no one earns a majority, the top two finishers will advance to a November runoff. Don’t be surprised if things turn nasty. Everyone is aiming to claw their way into round two, and no one ever remembers who finished third.

Please note: this article was originally published in LA Mag.