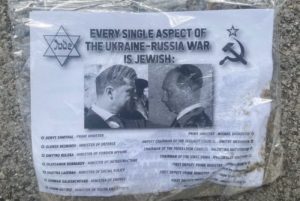 A spate of antisemitic flyers were found scattered around Beverly Hills and Los Angeles on the morning of April 16.

Footage of the vehicle in thread. pic.twitter.com/gWjq2kwYeN

Video footage of the vehicle and person/people throwing the antisemitic fliers. pic.twitter.com/MhFrRCHKvb

Beverly Hills Police Sgt. Ryan Dolan told the Times: “We’re still figuring out where they all are. There is no credible threat to people right now.”

Beverly Hills Mayor Lilli Bosse condemned the flyers in a tweet, stating: “Hate will NEVER Win. We are only stronger.”

Los Angeles City Council candidate Sam Yebri said in a statement that “the timing of this act was clearly intentional,” as they came about during the beginning of Passover, when “Jews around the world sit down to remember the enslavement of generations of Jewish people in Egypt and to celebrate our liberation.” “In that vein, we must remember that only sunlight can drive out darkness,” he added. “We must stand together across our diverse communities and link arms to continue in the fight for equality and tolerance for all, especially on the eve of the Passover and Easter holidays.”

“We’re outraged that hateful flyers were put in multiple LA locations during Passover,” Anti-Defamation League Southern California tweeted. “We continue to be in touch with law enforcement. An action that people can do: Don’t name the group responsible. Don’t give them acknowledgement or publicity they crave.”

We're outraged that hateful flyers were put in multiple LA locations during Passover. We continue to be in touch with law enforcement. An action that people can do: Don't name the group responsible. Don't give them acknowledgement or publicity they crave https://t.co/YzLwvdyvu9

“Once again, Angelenos of all backgrounds awoke to crude antisemitic flyers littered across Beverly Hills and several Westside neighborhoods, this time during Passover. Gathered around our Seder tables this past weekend, we re-told the story of our people’s resilience in the face of oppression,” American Jewish Committee Los Angeles Regional Director Richard Hirschhaut similarly said in a statement to the Journal. Similar flyers blaming Jews for the COVID-19 pandemic had been placed in Los Angeles in November and December. “Then and now, we remain undaunted and will not be intimidated, for we know that justice will come for those who live with hate in their hearts. We applaud the Beverly Hills and Los Angeles Police Departments for their swift investigation of this cowardly and hateful act. Hardly a matter of free speech, this is trespassing fueled by hate.”

Rabbi Abraham Cooper, Associate Dean and Director of Global Social Action Agenda at the Simon Wiesenthal Center, also said in a statement to the Journal: “These are vile anti-Semitic messages sometimes changed to reflect local prominent Jews. This group has found [a] way to gain notoriety by their cowardly anti-Jewish screeds thrown in Jewish neighborhoods. Fueled by local notoriety and social media platforming. Disgusting and outrageous.” He added that the “expanding expressions of Jew-hatred in society contributes to the normalcy of anti-Jewish hate.”

StandWithUS CEO and Co-Founder Roz Rothstein, the daughter of Holocaust survivors, said in a statement to the Journal, “Littering homes with fliers containing false messages about Jews in an attempt to harm them in the public eye is disgraceful at any time. To do this while Jews are celebrating Passover adds insult to that injury, but will not detract from our pride in our identity and our traditions. Attacks like this only serve to strengthen our sense of culture and peoplehood. Those whose reputations should be sullied here are the individuals responsible for spreading lies and seeking to cause division and discord. We encourage residents to report this activity to law enforcement if their homes are repeatedly targeted with this kind of harassment.”

Stop Antisemitism Executive Director Liora Rez said in a statement to the Journal that they are “disgusted” that the group behind the flyers “continues on their hateful harassment campaign against Jewish Americans, specifically during the Passover holiday. We’re asking local prosecutors and police to carefully examine each individual incident in order to properly identify how to stop this insanity. Enough is enough!”