Asylum, Which Made the United States a Leader in Protecting Jews, Could Disappear 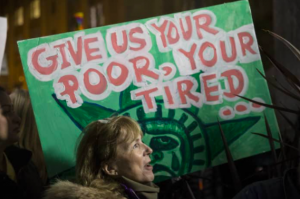 Like tens of thousands of Angelenos, my family arrived with virtually nothing after fleeing harrowing persecution. Revolution and war tore apart my native Iran. After Ayatollah Khomeini’s return to Iran, the execution of Jewish leader Habib Elghanayan in 1979 and the Iran hostage crisis, being Jewish in Iran became perilous. In 1982, the regime wrongfully imprisoned my grandfather in the infamous Evin Prison; that year, when I was 1 year old, my parents and I fled Iran.

My family relied on smugglers to get us out of the country, to Pakistan. We hoped that if we could just reach an American Embassy, Americans would help us. After escaping from Iran, HIAS — the world’s oldest and only global Jewish refugee resettlement agency —  helped us safely reach Rome, where we received our security clearance and papers in order to find refuge in Los Angeles. HIAS helped thousands of families like us navigate our new country and find apartments, enroll in school, and connect with synagogues and Jewish communal organizations.

Today, the rules are changing. The America that welcomed us when we escaped religious persecution is in danger of disappearing. According to proposed immigration rules, the fact that we were smuggled and the fact that we had traveled through other countries would have prevented us from being accepted into the U.S. In fact, current travel bans already have prevented Jews and other persecuted minorities from fleeing Iran for the United States. Hundreds who left Iran with the hope of resettling in America have been stranded in Austria for the past three years.

Unless we act, asylum, which made the United States a leader in protecting Jews, could disappear.

Jews were among the first beneficiaries of the asylum system. After the passage of the racist 1921 and 1924 Immigration Acts severely cut Jewish immigration, HIAS helped our people escape the rise of fascism across Europe. Had asylum laws existed then, millions of Jews might have escaped extermination. After the Shoah, HIAS worked to resettle survivors in the United States and any country that would accept them. HIAS brought hundreds of thousands of Jews from Iran and the former Soviet Union to the United States throughout the 20th century.

The 1951 U.N. Refugee Convention was a direct response to what happened to Jews in the Holocaust, signed by the U.S. and Israel. Congress codified it into law under the unanimous passage of the 1980 Refugee Act, just two years before my family’s arrival. For most of our living memory, there was complete bipartisan agreement on welcoming asylum seekers as good for the economy and foreign policy.

By the turn of the century, when the vast majority of Jews lived free of persecution for the first time in millennia, HIAS made the principled decision to help refugees and asylum seekers of all backgrounds as the world entered the worst refugee crisis since World War II. It is a powerful expression of Jewish values, supported by more than 450 synagogues and scores of American Jews.

As a former refugee who had to be smuggled across borders to find safety, and as someone deeply invested in strengthening Jewish life in Los Angeles, this work speaks to me. A Jewish agency assisting anyone fleeing persecution around the world honors what it means to be Jewish, applies our values and history to the challenges of today, and empowers the Jewish community’s relations with other communities. I can’t think of a more powerful way to stand up to white nationalism on the alt-right and anti-Semitism on the extreme left.

The Los Angeles Jewish community must protect the American legacy of asylum — not only because it protects Jews, but because it protects anyone yearning to be free. To be a Jew means to welcome the stranger (mentioned 36 times in the Torah, more than any other commandment), regardless of where the stranger is from. Asylum is Jewish, and it made and keeps Jews safe. Asylum is American, and it made and keeps America great.

Please note: this article was originally published in Jewish Journal.