From all candidates running for the open CD5 seat in Los Angeles City Council elections in 2022.

We are the four candidates on the ballot in the June 7, 2022 primary election for the open CD5 seat on the City Council. We join together in unison again, as we did in September 2021, to tell the public and current City Council that we demand proper Environmental Review at the West Pico Drill Site in CD5 (9101 & 9151 W. Pico Blvd, LA 90035).

We support the appeal to City Council submitted by Neighbors for A Safe Environment (NASE), a local non-profit environmental organization in the CD5 community. We ask all Council Members to vote in favor of NASE’s appeal, which you can find here: Council File # 21-1025.

NASE filed its appeal in September 2021 to overturn the ZA’s granting of an improper Categorical Exemption from Environmental Review following 20 years of serious violations and illegal oil well projects at the West Pico Drill Site. The appeal to City Council has been pending for months, waiting for a hearing date.

On December 11, 2021, a spill of oil and production fluid surfaced outside the drill site.

The spill on the surface was cleaned up, but it originated from an underground pipeline leak that was larger in volume. State regulatory agencies have ordered a subsurface cleanup. Investigations by the State regulatory agency CalGEM, the LA County Fire Department’s Haz Mat Unit, and documentation researched by NASE all confirm that the root causes of the spill were put in place in 2001. There was illegal and improper pipeline work executed in 2001 and then followed by 20 years of negligence that left this clear and present danger uncorrected. Federal, State, and City laws and regulations governing pipeline safety and spill prevention were violated repeatedly for 20 years.

The spill in December 2021 opens yet another very disturbing window on the risks to the community from 20 years of operator noncompliance fostered by 20 years of City negligence. The Categorical Exemption from Environmental Review continues that negligence into the future.

The causes of the spill should have been detected and prevented years ago by proper compliance inspections (which the City does not do at all) and by proper ZA reviews (which the City did improperly in 2000, did not do at all in 2010-11 and 2015-16 despite requirements in a binding Settlement Agreement signed by City Council, and the City short-circuited in 2020-21).

In addition, had the 2020-21 ZA review been completed properly in 2020 or 2021 with honest “findings” and appropriately strong “corrective conditions” for all of the other major violations that were documented, then the City and ZA could now be responding to the spill and its 20 year trail of causes by taking far stronger action. This is worth a short explanation.

Revocation of a Conditional Use Approval requires that there must be a record of City agencies having tried to correct the problems and that the owner/operator refused to comply with those citations or corrective orders.

Los Angeles Municipal Code (LAMC) Section 12.27.1 is the Zoning Code section on “Nuisance Abatement/Revocation.” It empowers the Director of Planning to take extremely strong steps in response to serious non-compliance and the creation of public nuisance, including revocation of Conditional Use Approvals. But revocation is allowed only under strictly defined circumstances so that the action can survive legal challenge.

The 5th Amendment to the U.S. Constitution protects against the taking of property or use rights (which are property rights) without due process and/or fair compensation. LAMC 12.27.1 is written carefully so as to protect the City from costly losses and ineffective actions against trouble-causing land uses. Conversely, it makes strong action sustainable, if the action is undertaken properly.

Anyone who tells City Council or the public that a ZA Review can be short-circuited in order to just jump forward to revoke conditional use rights is doing a grave disservice to the public and the City. Without an official record of documenting problems, ordering corrective measures, and requiring stringent new controls and mitigation measures, such as would come from a rigorous and full ZA review that includes proper Environmental Review under CEQA, there cannot be a legally sustainable revocation ruling. 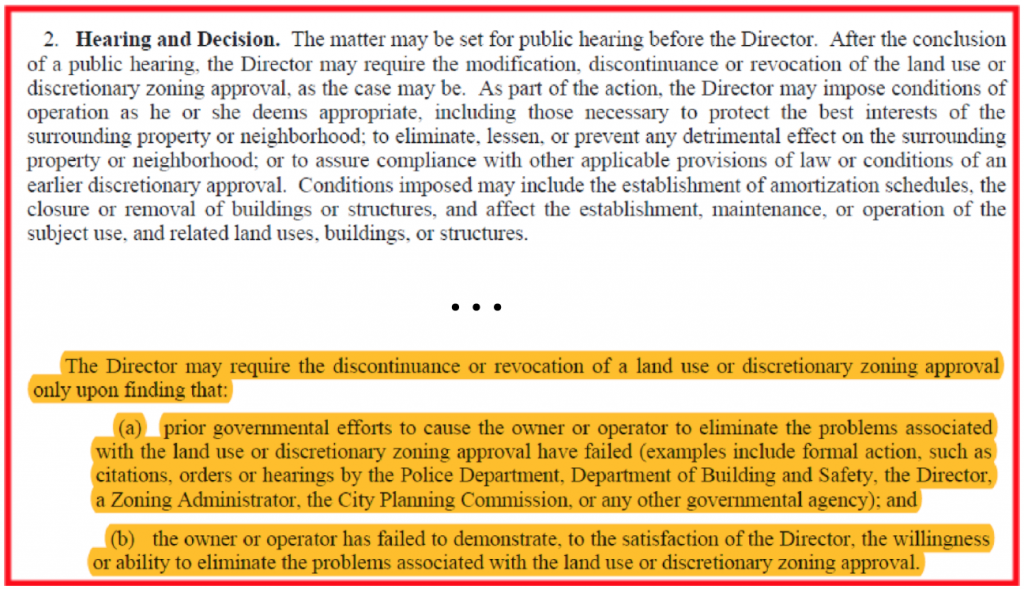 The short-circuiting of the 2020-21 ZA review (no environmental review under CEQA, ZA refused to look at 24 illegal oil well projects, ZA refused to look at the whole drill site, ZA refused to even consider corrective orders or new conditions despite acknowledging they were needed, etc) has set the City back at less than square one when it comes to taking any stronger action in response to the spill.

This is a disaster not just for the CD5 community, but for the entire City. It puts out a welcome mat for illegal oil drilling and a bright neon sign inviting oil companies to ignore City law and thereby evade CEQA, too.

If City Council allows the Categorical Exemption to stand, it would be endorsing the ZA’s argument that the proximity of oil wells to residences is normal. That is a dagger to the heart of CF 17-0447, which premises the City’s desire to phase out oil wells solely on the basis of their proximity to sensitive land uses. It would be a multi $ Billion gift to the oil industry, enabling it to win a Constitutional challenge to an amortization policy because City Council would have contradicted its premise that the proximity of wells to sensitive land uses is unacceptable.

We want the public and current members of City Council to know that whoever among us wins election, we will not tolerate the evasion of legally required Environmental Reviews for oil drill sites, the evasion of legally required Zoning Administrator reviews for oil drill sites, and we will certainly not tolerate illegal oil drilling – not in our Council District, nor in any part of the City.

Sam Yebri is a longtime community and non-profit leader, workers’ rights attorney, small business owner, and husband and father of four young children who will fight tirelessly for the residents of the 5th District of the City of Los Angeles. When he was a year old, Sam and his family arrived as refugees from Iran seeking refuge in the 5th District, where they experienced firsthand the promise of Los Angeles. He attended public schools in the 5th District and went on to earn degrees from Yale and USC Law School. Sam built a successful law firm in Century City, where he has used his expertise to advise startups and small businesses and litigate on behalf of workers. Committed to public service and championing the promise of Los Angeles, Sam formerly served as a Commissioner on the Los Angeles Civil Service Commission and as a member of the City Attorney’s Gun Violence Prevention Task Force and currently serves as a board member of the Friends of Westwood Library. He has also served the Los Angeles community as a board member of numerous non-profits, including Bet Tzedek Legal Services, the Anti-Defamation League, the Jewish Community Foundation, and ETTA, which provides services and housing for developmentally disabled adults.