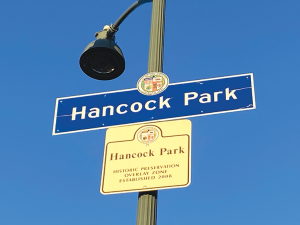 Candidates Sam Yebri, Katy Young Yaroslavsky and Jimmy Biblarz answered questions asked by Hancock Park Homeowners Association president Cindy Chvatal-Keane during the hour-long forum. Notably absent was a fourth candidate, former Mid City West Neighborhood Council chair Scott Epstein, who said he wasn’t invited to the forum and was not allowed to participate when he asked to be included.

Chvatal-Keane said the forum was organized in early February and the board decided to invite the three top candidates who had raised the most money in campaign donations. At the time, there were six candidates running, including Yebri, Yaroslavsky, Biblarz and Epstein, as well as Kristina Irwin and Molly Basler, who have since dropped out of the race after failing to gather enough signatures to qualify for the ballot. Chvatal-Keane said by the time Epstein contacted the HPHA on March 19 about being included, it was too late to alter the program format.

“There was no slight intended. We planned this in early February and we publicized it as only being the three candidates,” Chvatal-Keane said. “It was too late in the game. I’m happy to invite [him] to our next meeting and give the opportunity to answer questions.”

Epstein said he believes the reason he was not invited is because many HPHA board members are supporting another candidate.

“Disappointed, yes, but not surprised. Half a dozen board members are publicly in support of Sam Yebri. It sure seems politically motivated, and it sure doesn’t seem like it serves the people of Hancock Park,” Epstein said. “Look, I have plenty of opportunities to get our message out. There are plenty of forums ahead and we will have opportunities to connect decisively with voters.”

Chvatal-Keane said the HPHA does not endorse candidates, but individual board members, like anyone else, are allowed to personally choose which candidate to support. She added that the forum on March 21 was specifically intended to give the public information on the candidates who are frontrunners.

Chvatal-Keane said the questions were given to the candidates ahead of time to give them a chance to prepare. The questions focused on constituent services, public safety, homelessness and infrastructure repair, among other topics.

“I think it’s really important to note that the most important job of an L.A. City Council member is to provide excellent constituent services.” said Yaroslavsky, a former land use attorney and policy advisor to Los Angeles County Supervisor Sheila Kuehl. “It doesn’t matter what else I’m doing well. If I’m not providing excellent constituent services through a really responsive, excellent team of people on the ground every day working hard to develop and maintain relationships, I’m not doing my job, and it literally doesn’t matter what else I’m doing.”

“That’s what this job is about, constituent services,” said Yebri, an attorney with a private practice. “First off, I come from the private sector and am the only business owner among the candidates. And if elected, I’ll be the only business owner on this council. I know that if I don’t return my client’s phone call or email within 24 hours, I will get fired. So that’s a mindset I’m going to bring to this job. And that will be my staff’s mindset as well.”

“Neighborhood services are the basis of government trust, and that government trust is broken,” said Biblarz, who also an attorney. “It’s why when there is a bug infestation that wreaked havoc on Hancock Park’s unique tree canopy, concrete over asphalt streets, and the various other municipal services that have gone unattended, this has to be the basis of trust between an elected official and the citizenry. I have to be a careful listener. That’s what I’ll bring to City Council.”

The candidates were also asked how they would use discretionary funds, which are funds the council office distributes for local projects in their district. Yebri said his priority will be to use discretionary funds for infrastructure projects like better sidewalks and lighting, and community emergency preparedness, as well as police overtime when crime spikes. Yaroslavsky said she would implement a similar system to the Discretionary Funds Task Force used by former 4th District Councilman David Ryu. Community members would provide input on projects and the task force would make final decisions.

Biblarz said he would also be guided by community input when determining how to distribute discretionary funds. He cited “participatory budgeting” as an important component of addressing public needs.

Chvatal-Keane asked the candidates to summarize in one word what they think the most important job is for a council member. Both Yebri and Biblarz said “safety,” while Yaroslavsky said “collaboration.”

The candidates had differing viewpoints on crime and public safety. Chvatal-Keane asked how they would make residents feel safer.

“Our police force is down to 9,400 sworn officers roughly, down from the 10,000 we had … under Mayor Villaraigosa. And that number dwindles every single day because of early retirement and low morale and the failure to recruit more police officers,” Yebri said. “I am the only candidate in this race who supports adding more LAPD officers. We need to get guns off the streets faster through gun buyback programs, enforce our ghost gun laws that we just recently enacted and we need to employ more technology [like] cameras to deter and solve crimes.”

“I am all about what works, and being laser focused on the most research tested methods for reducing violence,” Biblarz added. “We have to think about public safety broadly. Police are a key piece, but so are having other strong social institutions, good schools and safe roads.”

“We all deserve to be safe in our communities, and it doesn’t feel like a safe place right now. It feels very out of control,” Yaroslavsky said. “We need a well-funded, well-staffed, well-trained, accountable police department, we need more officers out on the street. That means doing two things. It means shifting officers away from jobs that they’re doing right now that are better handled by other people. It also means we’re going to probably need to hire some more officers, but until we have a sense of how many officers are right now doing things they shouldn’t be doing, I don’t know how many officers we need. I suggest we do an audit and figure out how many new officers we need.”

Chvatal-Keane also asked the candidates to state yes or no whether they support the recall of Los Angeles County District Attorney George Gascon, and they all answered “no.”

With homelessness and affordable housing, the candidates had differing views, but each agreed that more housing needs to be created to keep people from falling into homelessness in the first place. The three candidates said they support protections for single-family neighborhoods like Hancock Park with historic preservation overlay zones. However, they added that addressing homelessness is a top issue affecting the city, and more needs to be done to balance the needs of providing services to individuals experiencing homelessness and clearing encampments to maintain the integrity of neighborhoods.

“What we have to do is preserve rent-controlled and affordable units that currently exist,” Yebri said. “We need to prioritize, streamline and subsidize the construction of affordable housing near transit. That’s where housing belongs.”

“We need to be laser focused on the missing pieces that we don’t have right now that are leading contributors to homelessness,” Yaroslavsky said. “We need affordable housing, we need workforce housing and we should be prioritizing that housing near job centers.”

Chvatal-Keane asked about transportation and for the candidates in one word to describe what mode should be the highest priority. Biblarz said buses, while Yaroslavsky said bicycles and Yebri cited electric vehicles.

“It’s really a crazy time to be living in Los Angeles in so many ways. And one of them is because people are nuts behind the wheel. It’s like we’ve lost all sense of civility,” Yaroslavsky said. “I think we need to slow down maximum speed limits. I support putting up more traffic lights, more cameras to bust people who are speeding excessively. Having more cameras up to catch people who are really driving dangerously is important. And then also we need to have safer intersections, safer crossings. So many people die every day just crossing the street and riding their bike. It’s not safe.”

“In 2021, traffic deaths were nearly on par with homicides. Let that sink in for a second in terms of the magnitude of this public safety crisis,” Biblarz said. “And the reason we don’t see the same public outcry is because we’re desensitized to it. It’s become a fact of life and we need to disrupt that status quo to make real inroads on this incredibly important safety issue.”

“We have to slow down traffic. We have to reduce speed limits with proactive traffic mitigation measures,” Yebri added. “I believe that we need more police resources and more personnel, more technology not less devoted to address these other crimes on our streets. Because we know that people are dying and like Jimmy said, it’s up there on par with homicides.”

The candidates all said more collaboration is needed for fixing infrastructure problems and repairing roads and sidewalks. Biblarz said he plans to leverage federal funding for local repairs, while Yaroslavsky said her experience working in government has shown her how partnerships between federal, state and county officials benefit local communities. Yebri said his priority will be to fix streets, sidewalks and other infrastructure, which circles back to his initial response about the importance of delivering services for constituents.

The public will have another chance to hear from the candidates for the Los Angeles City Council’s 5th District seat, including Epstein, when the Pico Neighborhood Council hosts a virtual forum on Wednesday, March 30, from 7-8:30 p.m., via Zoom. The neighborhood council includes the South Carthay, Carthay Square, Wilshire Vista, Pickfair Village and Faircrest Heights neighborhoods.