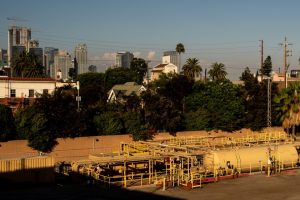 Neighborhood activists called for it. The Los Angeles City Council voted for it. And Mayor Eric Garcetti made it a plank in his Green New Deal: a new system of annual inspections for oil and gas facilities in Los Angeles.

But 2½ years after council members asked for a new ordinance mandating annual city inspections of oil sites, no such law has been approved. The fledgling office that oversees oil sites has suffered dwindling staff — it now stands at just two employees — and was turned down for added staff who could coordinate such inspections.

The proposal has stalled even as L.A. politicians float a far more dramatic and potentially complicated plan to phase out oil and gas drilling entirely, a goal championed by environmental activists who believe regulation is inadequate. Some critics complain that the city is neglecting basic steps to help protect residents while talking up radical change.

The warring arguments over how to protect Angelenos come amid persistent concerns about oversight of L.A.’s petroleum industry, which has hundreds of active wells citywide and generates more than $20 million in city revenue annually.

In Los Angeles, perhaps the most notorious case was the Allenco drilling site. Families in the surrounding University Park neighborhood complained of foul odors, headaches and persistent nosebleeds.

Although the Allenco site was ultimately ordered to shut down permanently after years of legal and political wrangling, some critics argued problems there could have been addressed sooner if L.A. had been regularly checking on whether oil sites were adhering to city conditions meant to prevent noise, odor and other issues.

The lack of such regular inspections is “at the heart of everything else that has gone wrong,” said Michael Salman, a UCLA professor emeritus of history who has become a vocal advocate for stiffer regulation of oil and gas sites.

In 2016 the city had heralded the hiring of a petroleum administrator — a job that hadn’t been filled by a full-time employee for decades — as a key step toward properly monitoring oil in L.A. But the Long Beach engineer it hired for the job was plucked for a state job in 2019, and the city has been slow to hire a replacement amid the pandemic.

When a South L.A. group grew alarmed this year about intense heat and possible emissions from equipment at a petroleum site on West Adams Boulevard, the building department told it to take its concerns to the petroleum office, which falls under the public works department.

“Given that the Petroleum Administrator position remains vacant, would you please direct the appropriate party to conduct an inspection with due urgency to ensure that these exhaust stacks are in fact permitted and installed to code?” Redeemer Community Partnership President Richard Parks wrote to the public works department.

A public works official replied that the engineer responsible for inspections had just retired, but said he would forward the request to the “acting” administrator. (E & B Natural Resources, which operates the site, said the equipment meets safety requirements and poses no threat to the neighborhood.) Parks said that after he reached out to the city, nothing happened.

L.A.’s failures to enforce its existing rules, he said, have convinced him that more regulation is not the answer. “We need to recognize that this is a toxic land use that is fundamentally incompatible with neighborhoods,” he said.

Industry groups argue that oil facilities are already regulated and inspected by many other agencies and have railed against the campaign to ban drilling in Los Angeles. Before his exit, then-Petroleum Administrator Uduak-Joe Ntuk estimated that prohibiting drilling close to homes and schools could cost the city anywhere from $700 million to $97 billion if the city has to pay oil producers for “the future value of mineral rights.”

Environmental advocates from the STAND-L.A. coalition have sharply disputed those estimates, and in December a council committee asked city staffers to look into phasing out drilling in the city entirely.

Councilman Paul Krekorian said that L.A. would not face costly liability if the phaseout included a “reasonable amortization period.” The California Independent Petroleum Assn., which represents oil producers, has insisted such a move would still be “an illegal taking.”

As city officials weigh that plan, the petroleum office has shrunk to just two staffers amid a hiring freeze. In October, a council committee shelved a request for more employees to coordinate inspections of oil sites.

When the staffing plan came to the council, it also removed a request to fill a single position for a “management analyst” for the petroleum office, even though public works officials had argued the job would help generate revenue.

Krekorian said he wasn’t convinced that would offset the costs as L.A. faced a massive deficit. Budget officials had also argued the city should hold off on more hiring while the office was seeking a replacement for Ntuk.

Attorney Sam Yebri, who is running for a Westside council seat, decried those decisions.

“It’s inexplicable why the city would not fund and support environmental specialists to guarantee that these active oil sites next to our homes and schools are safe,” Yebri said, calling the absence of a permanent petroleum czar an “excuse.”

Martha Dina Argüello, co-chair of STAND-L.A. and executive director of Physicians for Social Responsibility-LA, said that phasing out drilling would also require an effective “regulatory regime.” If oil wells are being closed, “that needs to have strong regulatory and community oversight so they do it right,” Argüello said. Environmentalists will be asking the city, “What’s the infrastructure you need to actually make this policy real?”

Before Ntuk left his city position, the petroleum czar had recommended annual inspections, stating in a report that they could help prevent leaks and ensure safety rules were followed. Although some city agencies, such as the Fire Department, inspect specific aspects of drill sites, Ntuk wrote, it has been a “decentralized” system that lacks coordination.

When a council committee backed the inspection plan in 2018, Councilwoman Nury Martinez expressed a sense of urgency. “We owe it to the most vulnerable communities to get out there and monitor these sites ASAP so we don’t continue to wait on bureaucracy to drag its feet,” Martinez said, asking for “preliminary review” of oil sites in such areas.

The following year, residents were pushing for annual city inspections at Rancho Park — an oil site ensconced on a Cheviot Hills golf course — after a report on the site by city officials found that new equipment had repeatedly been installed without city approval. The Rancho Park operator, an affiliate of E & B Natural Resources, backed the idea of such inspections.

The planning department and a city commission instead decided that the oil company should turn over an annual report on equipment, repairs and maintenance work. Critics argued it was inadequate to task the company with inspecting itself.

At the time, however, Ntuk said he lacked the budget or staff to carry out annual inspections. In addition, Ntuk said the council had directed him to prioritize any initial reviews for oil sites in communities especially burdened by pollution — a category that wouldn’t cover Cheviot Hills.

“To say that the community and the company were for annual inspections and the city was against it is not true,” Ntuk said in an interview before leaving his city position. “We’ve been directed by the City Council to start a citywide program — which is happening.”

After the council voted to draft the inspection law, the public works department hired a contractor for $50,000 to help develop the inspection program. Public works officials said that work is still underway, slowed by the pandemic and thin staffing at the petroleum office. The city attorney’s office said it was waiting on a program before finalizing an ordinance.

“We were promised a number of times, ‘The city attorney is working on it, it’ll be just a few months,’” said Scott Silver, who lives a few blocks from Rancho Park. “It seems like there’s just bureaucratic delay and endless foot-dragging.”

Krekorian said that with Ntuk’s departure and the onset of the pandemic, the inspection ordinance “kind of fell off our radar.” Hiring a new petroleum czar “needs to happen yesterday,” he said.

Neighbors have also pushed for annual inspections of another Westside oil site off Pico Boulevard, where residents have complained of foul smells and shoddy oversight by the city, which neglected to carry out regular reviews of the site under a legal settlement. A decision from the planning department, which was tasked with the overdue review, is pending.

At a hearing last year about the Pico Boulevard site, Silver said it felt like “Groundhog Day” after what he had seen in Rancho Park, calling it an opportunity for the city “to finally walk the walk and not just talk the talk.”

In the meantime, community groups have continued to complain about the city not pressing oil sites for compliance with local rules. Redeemer Community Partnership sued the fire department in March, arguing that it needed to force inactive wells to be either reactivated or abandoned at an Adams Boulevard drill site and warning of the risk of toxic leaks.

The group Neighbors for a Safe Environment recently sent a letter to city officials asserting that the Pico Boulevard drill site was getting routine renewals to operate wells despite the fact that dozens of wells had been drilled, redrilled or converted without permission from the planning department.

The failure to properly scrutinize that and other oil sites has continued despite the fact that the L.A. Fire Department collects fees that are supposed to pay for inspections, the group argued. City attorneys and the public works department declined to comment on those claims; the fire department said the fees in question go into the city general fund.