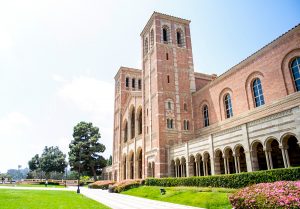 The Undergraduate Students Association Council Office of the External Vice President hosted the event virtually using Zoom. Sarah Wang, USAC external vice president and a third-year communication student, oversaw the event with the goal of helping students understand the scope of being involved in local politics.

Wang added that a lot of students, herself included, can sometimes underestimate the influence local politics can have.

“Whoever’s elected can affect every aspect of UCLA life, whether that be restaurants in Westwood or safety in this general area,” Wang said.

Wang said her team in the EVP office selected their questions for the candidates based on issues important to the UCLA community, such as the Westwood Village Specific Plan and the placement of a new metro stop at UCLA.

She also added that giving individual students the freedom to ask questions in addition to the moderated questions allowed the candidates to respond to issues more thoroughly. Since USAC offices are required to be nonpartisan, Wang said in order to avoid bias, the questions chosen by the EVP office were more restricted than student questions.

Candidates took turns introducing themselves before tackling a range of questions prepared by members of the USAC EVP office. Candidates expressed excitement about the Metro Purple (D Line) Extension, which is slated to open in 2027 and connect Westwood to downtown LA.

However, candidates had different approaches to how they plan to ensure public safety on transit.

Biblarz, a lecturer at the School of Law and one of the candidates, said having police present in areas like transit stations would be counterproductive because of a track record of profiling and bias.

“It augments the risk of police having a violent encounter with a person of color or other communities that are more susceptible to police violence,” Biblarz said.

However, Yebri, a lawyer and former commissioner on the LA Civil Service Commission, said he opposes removing law enforcement from public spaces such as schools, parks and transit.

“They’re the only people that are going to keep our families safe all throughout our neighborhoods, especially at a time when gun violence and gang violence are exploding throughout Los Angeles,” Yebri said.

The candidates continued to debate public safety when asked about potential budget increases for LAPD.

Yaroslavsky, senior policy advisor to LA County Supervisor Sheila Kuehl, said she does not support reducing the overall budget of LAPD but said she believes existing funds should go toward crime prevention and response and solving crimes. Yaroslavsky added she would support an LAPD audit to determine how they can best use their funding to improve community safety.

In November, the LA Police Commission voted to approve a 12.11% increase in funding for the coming year – up from a current $1.76 billion. The city is spending a total of $3.07 billion to cover the department’s total costs – which include pensions and benefits – for the 2021-2022 fiscal year.

Epstein criticized some of his opponents for their support of the ordinance. Epstein said he strongly opposes section 41.18, adding that a combination of short-term temporary housing and long-term permanent supportive housing would do more to help residents without housing.

“(Section 41.18) is a policy not to fix homelessness but to move an encampment from one block to another,” Epstein said.

Yebri, who has previously voiced support for LA Municipal Code section 41.18, said the city should be doing everything possible to provide housing for people experiencing homelessness, adding that the ordinance is one possible tool to incentivize people to accept shelter.

Irwin, a real estate agent, said she supports the ordinance but added that more holistic measures must be taken to address the issue of homelessness.

The primary election is scheduled for June 7, with the general election slated for November.

Please note: this article was originally published in Daily Bruin.