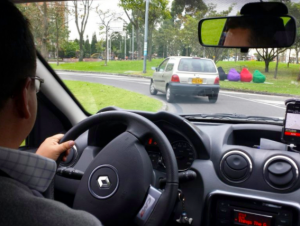 Two years ago, my car lease was ending — an unremarkable event in the life of a Century City lawyer.

It was, however, a warm autumn in which I found myself walking the mile from my home to my law office more frequently than usual. I also had noticed that my car was collecting dust on the weekends with the arrival of our second child, as all travel with the kids required the two car seats in my wife’s car. At that same time, I came to terms with a nagging problem of mine. I have a pesky need to be productive at all times, which, like an itch that needs constant scratching, included texting at red lights — a dangerous, illegal habit.

So, I began an experiment. I was curious if I could make it a week or two or longer without using my own car. I would walk more, carpool and Uber around town, and even occasionally take public transportation, like the new Expo Line downtown for court or a football game.

What I noticed first was a sense of relief, having been freed from driving in Los Angeles’ ubiquitous traffic. For a couple of bucks, I delegated the driving — and the stress and stir-craziness that Los Angeles gridlock induces — to a stranger. A worthy trade-off for preserving precious sanity.

Next, the savings piled up, which for me was several hundred dollars per month. I am currently spending about $300 to $400 per month on Uber and Lyft, which is not insignificant. But that is far less than my car lease, monthly parking in my office building ($225!), car insurance, gas, parking around town, wear and tear on my car, and the occasional parking ticket.

No less valuable was the ability to be productive on longer drives — making calls, reading or just catching up on emails or texts — or the freedom to choose not to be productive, by clearing some headspace or closing my eyes for a precious few moments. When I’m not trying to be productive, my conversations with our diverse city’s potpourri of drivers are pleasant and often enlightening. I have enjoyed speaking to new Americans from Africa, Europe and the Middle East about the politics of their native lands, and retirees about previous careers and adventures. (I have learned, however, to rarely share that I am an attorney, at the risk of being trapped in an uncomfortable free legal consultation.)Of course, my experiment would have failed had the ride-sharing companies not made their products more convenient, user-friendly and reliable. Aggressive marketing campaigns and driver bonuses ensure there are customarily plenty of drivers whenever and wherever I am in need of a ride. Entertainment venues — like stadiums and amusement parks — have designated drop-off and pickup spots to expedite the experience. The GPS systems for both ride-sharing companies have become more reliable, such that you can confidently plan when the driver will pick you up and when you will arrive at your destination. (Barring the exceptional circumstance where my driver, to my horror, mistakenly took Interstate 10 west to go downtown from Westwood).

In fact, these days, I am chronically arriving early to destinations, and because I am dropped off right at the destination, I can avoid the time needed to find or fight for a parking meter or parking space. And, prices for the consumer are remaining low and even decreasing. With Uber and Lyft’s new flat-rate packages, weekly promotions and the cost-efficient Pool and Line carpooling options, certain short non-rush-hour drives can cost less than $4. Plus, if something goes wrong with your experience, both companies will rush to refund your money or discount your next ride. Thankfully, this is one industry where the customer is still king. I also like that many Uber drivers now allow me to preset my music so when I open the door to my Uber, my Frank Sinatra Pandora station is already playing.

Finally, a word about walking. The 20 minutes I walk to or from work is more than just needed exercise and a breath of fresh air. It is more than a welcome opportunity to make a call to my 88-year-old grandmother or listen to music or a podcast. It is an escape from a car culture that saps our energy and pollutes our planet. I know I am not making a huge environmental difference, but it is a start. A dozen friends have even told me that they have followed my lead and have given up their cars after reading on Facebook about my “experiment.”

On a recent morning, a friend spotted me walking to work as he inched along in his car on Santa Monica Boulevard at 10 mph. He immediately texted me, asking if I was OK and whether I needed a ride. I smiled. I called him — rather than texting, of course — and told him that everything was great, admonished him not to text and drive, and asked him when his lease was up.