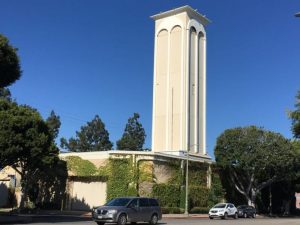 The City of Los Angeles Office of Zoning Administration issued a Letter of Determination (LOD) on June 2 regarding the West Pico Oil Drill Site that has been a source of community contention for decades.

After a year of study, the Zoning Administrator found that the operator of the facility, Pacific Coast Energy Company, was in violation of several conditions imposed by the Board of Zoning Appeal and the 2001 Settlement Agreement.  At the same time, the lengthy letter stated that the operator was in substantial conformance with all of the other conditions previously imposed by the Board of Zoning Appeal.

The massive oil rig tower and facilities that stretch two city blocks at 9101 and adjacent 9151 W. Pico Blvd. just west of Doheny Drive, sit in the heart of the Pico-Robertson Jewish community. It was constructed in 1966 and has functioned as an active oil drill site ever since.

Criticism of the Zoning Administrator’s findings was heated by those who have worked for years to either put tighter restrictions on the site or shut it down entirely.

Fifth District Councilmember Paul Koretz issued the following statement: “My concerns for the health and safety of the community have not been satisfied by the Zoning Administrator’s determination, which found the oil site to be in substantial conformance despite unresolved violations that includes an LAFD Fire/ Life Safety Violation. The Zoning Administrator took nearly a year to issue the Determination and the oil company still failed to resolve compliance issues in that time.  I am weighing my options.”

Rabbi Yonah Bookstein, co-founder of Pico Shul, which is directly across the street from the oil site, and also a member of the Pico Robertson Health and Safety Coalition said, “The ZA (Zoning Administrator) ruling on the West Pico Drill Site is full of contradictions, errors of law, and errors of fact. The ruling highlights the City’s willful disregard for the health and safety of residents, and City and State laws. This ruling will certainly be appealed.”

Michael Salman, Professor Emeritus of history at UCLA, has been an ardent opponent of the site. “The ZA makes numerous errors of law and fact, and did not conduct the review that is legally mandated by Condition 78 of the 2000 approval,” Salman said.  “Both the oil drill site operations and the ZA are continuing to violate City and State law, as they have been doing since 2000.”

The Zoning Administrator’s findings will become effective after June 17, 2021, unless an appeal is filed with the City Planning Department.  Appeals can be filed at https://planning.lacity.org/development-services/appeal-application-online.