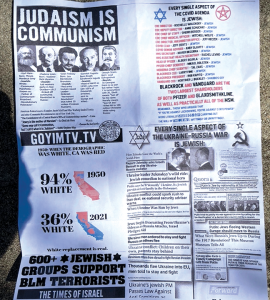 For the city of Beverly Hills, the incident marks the third time antisemitic documents have been distributed to some residences since November. According to the Beverly Hills Police Department, the flyers were distributed in the “extreme north end” of the city and were being collected.

“Hate will NEVER win,” Beverly Hills Mayor Lili Bosse said on Instagram. “We are only stronger.”

Sam Yebri, a candidate for the Los Angeles City Council’s 5th District, said flyers were also distributed to his neighbors in Westwood.

“I never want to have to make a post like this, especially on the eve of one of our most sacred Jewish holidays, but this is a matter of public safety,” he said in an Instagram post. “Earlier today, residents in Westwood, in my neighborhood, found shocking and offensive antisemitic propaganda delivered to their front doors. Be advised and stay vigilant. And remember that only sunlight can drive out darkness. … There is no such thing as a small act of hate, and hate has no place in CD5 or anywhere, especially on the eve of the Passover and Easter holidays.”

The Los Angeles Police Department’s West Bureau confirmed that the incident was originally reported to officers on April 15.

Anyone with information about the flyers is asked to call LAPD’s Major Assault Crimes Division at (310)444-1580.