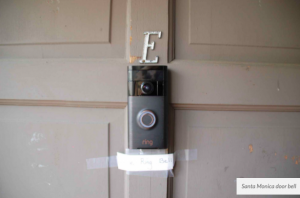 A Santa Monica tenant facing an eviction threat after installing a Ring doorbell on her front door will be allowed to stay in her home and keep the device, thanks to an intervention by the CEO of Ring himself.

“I’ve never seen a company where the CEO picks up the phone and offers to pay the bills,” Katz said, recollecting the phone call where Sminoff offered to provide her with an attorney and anything else she might need to work out a solution with her landlord.

Katz had installed a doorbell on the front door of her rent-controlled apartment on Marguerita Avenue when she broke her back a few years ago so she could hear the door when she was upstairs with her two young daughters. Recently, Katz replaced the electronic bell with a Ring device, which provides a live video stream to her phone and allows her to communicate with anyone at the door even when she is away from home.

Katz thought the Ring was necessary because the keypad to the apartment complex had been broken for years and the doors were kept unlocked all day and all night. However, on May 31 she received a letter from attorney Duane Hall, who represents the landlord American Career Investments, stating that the doorbell was an “alteration to the Premises … This is strictly prohibited.”

The letter warned Katz to remove the bell or face eviction. Two weeks later, Katz found having her own representation made all the difference.

“Tenants shouldn’t allow landlords to bully them by making absurd arguments that certain provisions override you ability to be safe and secure in your home,” said the attorney hired by Ring, Sam Yebri. Yebri sent a five-page letter to the landlord warning them to back off from the eviction threat or risk going to court. “If this matter results in litigation, we are confident that Ms. Katz and her young children would be sympathetic to any jury in Santa Monica,” reads the June 14 letter in part.

Yebri says California law protects stipulates leases can only by terminated for “material, substantial, or total” breaches of contract – not a small screw or two in the front door of a unit. In the letter, Yebri called the eviction notice harassment.

Katz hasn’t heard anything more from her landlord. She says now that the security panel has been fixed, her little daughters can play in the courtyard outside her unit. After seven years of living in the building, Katz is looking forward to many more raising her family just a block away from Palisades Park.

Please note: this article was originally published in the Santa Monica Daily Press.