LOS ANGELES, CA – This week, as The Greater Los Angeles Homeless Count began, voters were reminded of the sharp distinction between Sam Yebri and the rest of the Democratic field running for the open Los Angeles City Council District 5 seat.

Yebri is the only Democratic candidate in the race to support 41.18, the City of Los Angeles’ anti-camping ordinance, which prohibits individuals experiencing homelessness from camping, sitting, lying, or sleeping in protected zones and sensitive sites such as schools, daycares, and libraries, while keeping sidewalks clear for the disabled and elderly, and keeping parks safe for children.

All of Yebri’s Democratic opponents have repeatedly voiced staunch opposition to the ordinance: 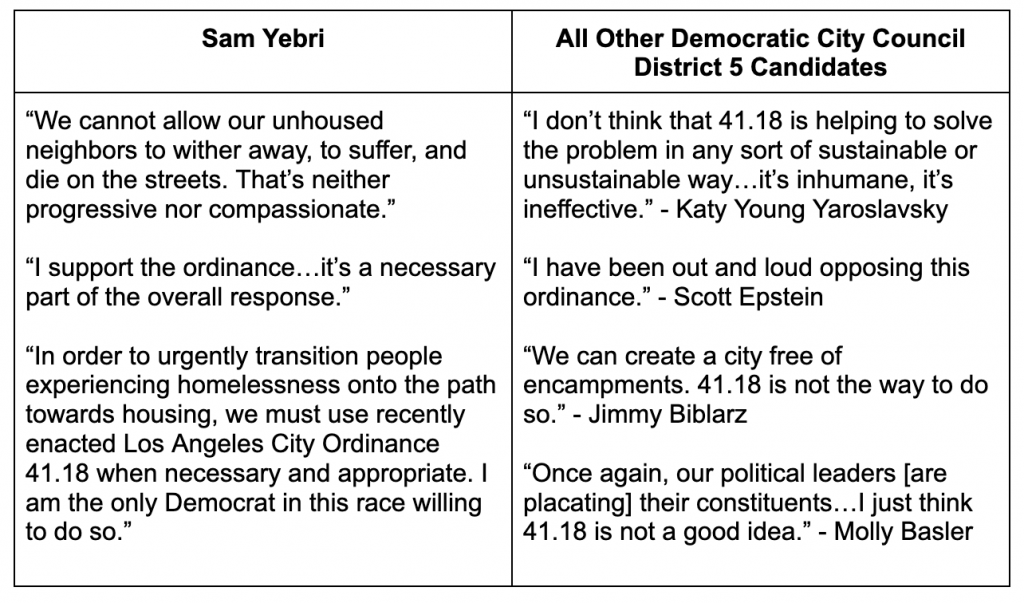 The legislation, signed into law in the summer of 2021, passed with an overwhelming majority of City Council votes: 13 to 2. Councilmembers Mike Bonin and Nithya Raman were the only two Councilmembers to oppose the ordinance.

Yebri is also the only candidate in the field – Democrat, Republican, or otherwise – to release a comprehensive homelessness plan. In it, Yebri states that it is neither progressive nor compassionate to allow Angelenos to suffer and perish on the streets. That is why, as soon as more shelter, transitional housing, and other interim housing options are available, Yebri supports using the ordinance as a street engagement strategy to help people experiencing homelessness transition into shelter and housing. Enforcement of the ordinance will also ensure public spaces are accessible and safe for all Los Angeles residents.

Yebri’s plan, which was announced in February 2022, reinforces his support for 41.18 and is being acclaimed by homeless services providers, mental health experts, community volunteers, and non-profit affordable housing developers alike for creating and adopting a compassionate, urgent, and effective plan to address Los Angeles’ humanitarian crisis.

Sam Yebri is a longtime community and non-profit leader, small business owner, workers’ rights attorney, husband, and father of four young children. Nearly 40 years ago, Sam and his family came to Los Angeles as refugees from Iran and moved to Westwood, where they experienced firsthand the promise of Los Angeles. He attended public schools in the 5th District and went on to earn degrees from Yale and USC Law School. Sam built a successful law firm in the District, working to provide effective representation in a broad range of issues, including civil rights. He has used his expertise to advise startups and small businesses and litigate on behalf of workers, tenants, and refugees. Committed to public service and championing the promise of Los Angeles, Sam formerly served as a Commissioner on the Los Angeles Civil Service Commission and currently serves as a board member of the Friends of Westwood Library. He has also served the Los Angeles community as a board member of numerous non-profits, including the Anti-Defamation League, Bet Tzedek Legal Services, the Jewish Community Foundation, and ETTA, which provides services and housing for developmentally disabled adults.