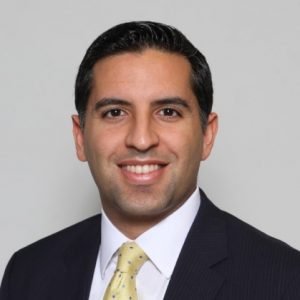 Sam Yebri’s filing of papers on Sept. 8 to run for the Los Angeles’ City Council 5th District seat in 2022, is a moment in Iranian Jewish history.

“[It is] a very exciting moment for the Iranian Jewish community .… My race is the first step toward the dream of more Iranian Americans being involved civically,” Yebri told the Journal.

According to L.A. City’s website, should Yebri succeed in his bid, he will act as part of the city’s governing body and largely enact and create appointments and ordinances for the mayor to approve or reject. He also will accept or change the mayor’s proposed budget, among other duties.

Yebri is vying along with others to replace Paul Koretz  — who also is Jewish — and whose term ends in 2022. Koretz, who has held the 5th District council seat since 2009,  plans to run for city controller in 2022.

The 5th District, which covers communities on the Westside, central-eastern Santa Monica Mountains and central-southern San Fernando Valley, is home to many Jewish communities.

The area also covers Westwood, where Yebri currently lives with his wife and four children in the epicenter of Persian life there, otherwise known as “Tehrangles,” “Little Persia” or “Persian Square.”

“It’s home,” Yebri said, adding that he and his family have lived there for more than 30 years. He now lives a couple of blocks away from his childhood home, where he attended the local public school, Fairburn Elementary.

After graduating from Yale University with a degree in political science, Yebri moved on to USC law school, and currently runs his own private law firm in the Century City area.

One of Yebri’s early endorsers for the seat is the Jewish former Democratic Congressman Henry Waxman, who represented California’s 33rd Congressional District from 1975-2015. Yebri worked for Waxman’s congressional campaign while he was in college. Yebri said in a public statement he was honored by Waxman’s endorsement and called him “one of the greatest legislators in our country’s history, a leader who inspired my own passion for public service.”

Yebri was only a year old in 1982 when his family left Iran to settle in Los Angeles about a year later. That too, he said, had a huge impact on his decision to run for public office. “I think being an immigrant refugee informs the way you look at the world,” he said. “I think it creates empathy for other people who are disadvantaged here or abroad and creates desire to give back to the country for the opportunities we have had. To see Los Angeles and America continue to thrive. My passion in life is to help engage other people throughout the community to care about service and care about giving back.”

Yebri, 39, already has a strong background in public service as the president and co-founder of 30 Years After, the nonprofit that promotes the participation and leadership of Iranian American Jews in American political, civic and Jewish life; as a former Los Angeles City commissioner; as a board member of the Jewish Community Foundation of Los Angeles; Bet Tzedek, a legal services nonprofit for low-income residents of L.A. County; and ETTA, a nonprofit that provides programs and services to people with disabilities and their families; and strong involvement with the American Israel Public Affairs Committee (AIPAC) and the Jewish Federation of Greater Los Angeles.

Someone who can offer some insight into the road that lies ahead for Yebri is former Iranian Jewish Mayor of Beverly Hills, Jimmy Delshad. Delshad told the Journal he has been aware of Yebri’s interest in running for the L.A. City Council seat for over a year. “I have encouraged him,” he said.

The Beverly Hills mayoral position is on a one-year rotational basis drawn from its city council, and Delshad served as mayor of the city with a large Iranian population twice: in 2007 and again in 2010, making him the first Iranian Jewish American to do so in that city.

And, like Delshad, Yebri is the first Iranian Jewish American to run for the L.A. City Council. Yebri said he doesn’t think that this is odd for the refugee community. He said he believes, with many younger Iranian Jews involved on college campuses with LGBTQ and mental health advocacy and awareness — topics that might have been taboo a few years ago — things for young Iranian Jews now are changing for the better.

However, he added that he has noticed an increase in homelessness in Los Angeles, and particularly in Westwood. If elected,  that is the first issue he wants to tackle. “[We see from COVID-19 that] local issues have a massive impact on our daily lives,” he said. “Homelessness, public health, how well our city functions.”

He added, “With anti-Semitism on the surge, [the] security of our Jewish institutions is paramount. That’s really an important responsibility of a council member and there are other issues too that affect the Jewish community, including the lack of affordable housing [and] environmental issues. There are 50 oil and gas wells operating with little oversight under our homes and schools on Pico,” he said.

Delshad has faith that, if elected, Yebri will be able to tackle all these issues and more. “Sam can bring trust and transparency to the L.A. community,” he said. “He has excelled in so many other areas and I think he will [have] a very positive effect on our [Jewish] community and the L.A. community. I wish him the best of mazel.”