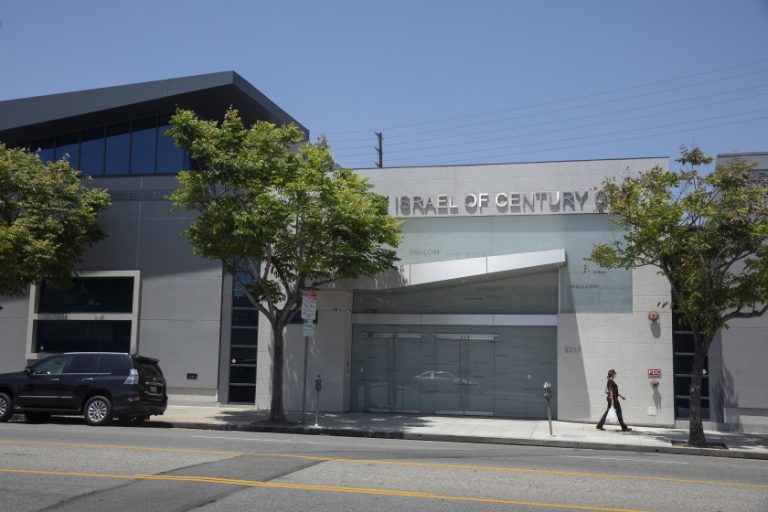 A vandal hurled concrete slabs this week at the windows of a West Los Angeles synagogue and a nearby kosher restaurant in the heart of the city’s Jewish community, the latest in a national surge in antisemitic attacks amid the recent Israeli-Palestinian conflict.

Security camera footage released to local media by Young Israel of Century City synagogue on Pico Boulevard showed a man about 1 a.m. Friday throwing a concrete slab at the building.

Shatter-proof windows at the Pico-Robertson synagogue prevented the concrete from breaking the glass, and the concrete bounced back onto the sidewalk. The man, who was wearing a red cap, tried a second time to lob the concrete at the synagogue, and he rushed off when it was unsuccessful.

“We will not be frightened by any act by anyone,” Elazar Muskin, an Orthodox rabbi who leads Young Israel of Century City, said at a news conference Friday. “There’s no place in our society, and this country created and built on the principles of freedom of religion, for such acts of vandalism and of hate.”

The vandal also is suspected of tossing concrete at nearby Pat’s Restaurant, a kosher steakhouse, and shattering a window there.

Errol Fine, the co-owner of Pat’s, told The Forward that he had not observed any similar attack in more than three decades of owning the establishment.

“They can break our windows but not our hearts or our resolve,” Fine told The Forward. “We’re going to stand fast and continue.”

LAPD Officer Rosario Cervantes said officers were summoned to the area in the 9300 block of West Pico Boulevard on Friday afternoon for a vandalism investigation. No arrests have been made, Cervantes said.

Leaders in L.A.’s Jewish community condemned the vandalism. Rabbi Marvin Hier, the founder and dean of the Simon Wiesenthal Center, said in a statement that hate against Jews was “flourishing” in the U.S.

Sam Yebri, a lawyer who is vying to become the City Council member representing Pico-Robertson and other West L.A. neighborhoods, said on Facebook: “Hate crimes like these in the heart of Jewish Los Angeles are meant to terrorize an entire community. We will not cower but will unite and protect each other.”

In recent weeks, there have been an uptick in reported attacks targeting Jews in the U.S., drawing a rebuke Friday by President Joe Biden as “despicable, unconscionable, un-American, and they must stop.”

The attacks came amid the armed conflict that began May 10 and lasted for 11 days. Israeli artillery and airstrikes killed more than 243 Palestinians in Gaza, including 66 children, according to the Palestinian Health Ministry. In Israel, 12 people, including two children, were killed by rockets fired out of Gaza by Hamas militants.

Last week, diners at a Beverly Grove sushi restaurant were attacked by a group that was shouting slogans against Israel.

A video capturing part of May 18 attack shows people in a caravan of cars flying Palestinian flags yelling, “F— you” and “You guys should be ashamed of yourselves” as they drive by the restaurant.

A witness, who asked to remain anonymous to protect his safety, told The Times, that during the attack, “They were chanting, ‘Death to Jews’ and ‘Free Palestine.’”

Two men have since been arrested on suspicion of assault for participating in the attack, which occurred about 2½ miles from the Young Israel of Century City synagogue.

Police are also investigating a May 17 incident in the Fairfax district, at Rosewood and La Brea avenues, that was partly captured by a security camera. In the video, a man in Orthodox Jewish dress flees from several cars that are flying Palestinian flags and appear to be pursuing him.