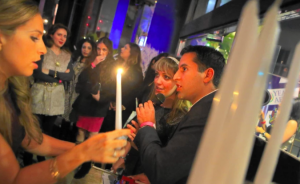 The wide veranda of the Beverly Hills mansion was packed with more than 300 people, the bar was bustling and the caterers were hustling to keep the young, dressed-up crowd supplied with fresh sushi.

But this was not just a party. There were officeholders and candidates — and some conspicuously placed voter registration forms.

It was the annual “pre-election mixer” put on by 30 Years After, a group of young professionals working to give voice to their fellow Iranian American Jews and to make their mark on local politics.

The group formed in 2007, nearly three decades after the 1979 revolution brought a fundamentalist Islamic regime to Iran and caused many Jews to flee their homeland. Its activities include biennial “civic action” conferences, voter registration drives, a fellowship program for young people to develop leadership skills and a “power brunch” series.

Never far from mind are Iran’s potential nuclear capability, the security of Israel and continuing political turbulence in the Middle East. Tabby Davoodi, the organization’s executive director and only paid staffer, remembers the words stamped on her Iranian passport as she arrived in the U.S. at age 7: Admitted Under Protected Refugee Status.

“To me, that was America in a nutshell, the land of my redemption,” said Davoodi, now 32.

As she checked in guests for the mixer in May, it was clear that — amid mounting voter apathy and low turnout at the polls — the group’s civic engagement had grabbed the attention of Los Angeles politicians.

Several spoke at the event, a high-energy blend of the social and political.

About halfway through the evening, four of the leading candidates to succeed retiring Rep. Henry A. Waxman (D-Beverly Hills) addressed the crowd in turns. Standing in the soft night, Republican gang prosecutor Elan Carr told guests: “My mom was born in Iraq and fled to Israel.”

“It was really satisfying to see that here are some young people who really understand there is a role for them to play… that the benefits of civic participation are something to be cherished,” Prang said.

A few days before the November election, Rep. Ed Royce (R-Fullerton), chair of the House Committee on Foreign Affairs, spoke at one of the group’s conferences. Guest speakers at the brunches, held at private homes for about 150 people, have included Waxman, former county Supervisor Zev Yaroslavsky, former state Assemblyman and current L.A. City Atty. Mike Feuer and Consul General of Israel David Siegel.

Feuer lauded the group for providing the young “with a whole new array of opportunities to expose them to politics and their potential to shape social changes, here, nationally and beyond. It has found a very significant place among key organizations in the city that focus on politics and social action.”

The group 30 Years After evolved from the chance 2006 meeting of Davoodi and Sam Yebri, who is 33 and the organization’s president. Yebri was in law school at USC and leading a national organization for Jewish law students. Davoodi, then director of campus affairs for the Israeli Consulate in L.A., was accompanying a diplomat to a speaking engagement that Yebri attended.

They found a lot in common: flight from Iran with their families — Yebri at 15 months old — and a desire to help others like them, who commonly call themselves “Persians” or “Persian Jews,” to become fully engaged American citizens.

“We felt we were not doing enough to contribute as new Americans and to honor our community’s unique history,” Yebri said in an interview.

Davoodi and her dad both teared up when she took him to vote for the first time two years ago. Yet the community’s elders have not added robust civic participation to their economic and educational achievements or joined much with non-Iranian Jews. Yebri and Davoodi believed their own generation could show the way.

Less than a year later, three dozen co-founders, students and young professionals, launched the organization with a volunteer board of directors, all under 35, an advisory board of local leaders and support from the Jewish Federation of Greater Los Angeles and other associations.

Their events, including an annual Hanukkah toy drive and mixer, are open to the public. The group maintains a website, https://www.30yearsafter.org, puts out an e-mail newsletter and uses Twitter and Facebook to market itself. It also has a blog on the Jewish Journal of Greater Los Angeles.

David N. Myers, chairman of UCLA’s history department and former director of its Center for Jewish Studies, said immigrants from Iran, as well as from Russia and Israel, did much to boost the size and dynamism of Los Angeles’ Jewish community. 30 Years After stands out, he said.

“There are lots of groups that seek to instill cultural and ethnic pride in their members,” Myers said. “What’s distinctive here is the yoking of that to civic participation.”

Nonpartisan and nonprofit, the organization doesn’t endorse candidates but introduces them to potential supporters and ensures that their concerns are heard.

And it’s not just about their own ethnic group. The organization recently received a grant for a project to connect its own young people with those in Latino, African American, Korean and Armenian communities. It plans to start next year.