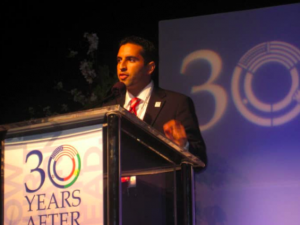 This month, there was talk in the local Jewish community after Sam Yebri stepped down as president of 30 Years After, the nation’s only civic action organization that promotes the participation and leadership of Iranian-American Jews in American civic, political and Jewish life.

I’ve known Yebri for 14 years, and the story of how he and a few dozen young Iranian-American Jews (including myself) co-founded 30 Years After is a testament to the redemptive blessings of America itself.

In January 2006, I was a 23-year-old recent college graduate serving as the director of academic affairs at the Consulate General of Israel in Los Angeles. During a visit to USC Hillel, in which I accompanied then-Consul General Ehud Danoch, I met a young Iranian Jewish man in his final year of law school. That wasn’t exactly news. If you’re familiar with Persian Jews, the bigger shock would have been if he hadn’t been studying to become a lawyer.

Yebri introduced himself as president of the National Jewish Law Students Association. Now this was interesting. Back then, young Iranian American Jews had only recently assumed leadership roles in campus Jewish and pro-Israel life, and most of the ones I knew, like Candice Daneshvar, the former president of Bruins for Israel at UCLA, were female. But here was a young man — a Jew who’d been born in Iran but who now served as national president of a Jewish student organization.

And there I was, the first Iranian Jew to have served in the public diplomacy sector of the Israeli Consulate in Los Angeles (to the best of my knowledge). Back then, few people identified Persian Jews with leadership roles in Jewish organizations or with working for pro-Israel endeavors like the Consulate (the latter was rich in meaning but not exactly lucrative in earnings). Yebri and I looked at each other with a sense of wonder (for me, anyways). It was almost as if we saw each other and thought, “You exist?”

In the months to come, I experienced this reaction nearly every time Yebri introduced me to other young Iranian American Jews who cared deeply about civic, political, Jewish and pro-Israel issues. These were people who read The Jerusalem Post on their laptops before getting dressed in the morning (it would be another year before iPhones were released), who had voluntarily enrolled in college courses about Iran and the Middle East despite being economics or biology majors and some of whom were so thirsty for Jewish learning that they dedicated their lunch hour at a law firm or hospital to learning Torah with a local Chabad rabbi. Some of them were born in Iran, others in the United States. Like me, almost all of them were in their early or mid-twenties.

We recognized that Iranian American Jews were extraordinarily well-equipped to have a real impact in civic affairs; for the most part, we’re a highly educated and passionate immigrant community. But back then, rather than helping make real decisions as impassioned lay leaders, some of us simply wrote generous checks and stood on the sidelines as Ashkenazim mostly took the reins of organizational leadership. And that only described our level of involvement within the Jewish community. In terms of local, state and national politics, we’d yet to even make a dent (a notable exception is Jimmy Delshad, who became the first Iranian American to hold public office in Beverly Hills, serving as mayor in 2007 and again in 2010).

We’d ask family members if they could identify their state senators. After all, there were only two of them. The responses were sometimes dismal. In some parts of town, our numbers were large, but we simply didn’t vote. In Beverly Hills, for example, we constituted nearly 25% of the population but seldom showed up at polling places.

The problem with Iranian Jews in America was twofold: Political participation wasn’t exactly in our blood. In Iran, we’d either known a monarchy (including that of the Shah and his father) or a tyrannical theocracy (after the 1979 Islamic Revolution). Jews didn’t have a say in political matters under either system.

Some of us thought it best to leave the voting to “the real Americans,” as my mother used to say. Others thought their vote and, by extension, their voice didn’t really matter; still others worried their party loyalties would be documented and used against them. You could take the Jews out of Iran, but it was harder to take Iran out of the Jews.

There was a second problem: the greater, non-Persian Jewish community didn’t quite know what to do with us. We were traditionally Jewish and fervently pro-Israel, but we didn’t support such organizations by offering to serve on boards or by giving the same big fiduciary amounts as many Ashkenazim. We were refugees and immigrants with amazing stories to tell, but we mostly kept these stories to ourselves. We were famously exclusive, partly because it was comforting to be with our own kin and partly because we worried we’d never be accepted by the greater Jewish community.

In plain terms, we didn’t have a seat at the proverbial table.

We had wonderful Iranian Jewish organizations and a good infrastructure system, ranging from social services to large synagogues, which helped our community of tens of thousands resettle in Los Angeles. The previous generation of Iranian Jews who’d settled here in the late 1970s and early 1980s had all but broken their backs to lay the foundations for our success in this city.

But we didn’t have much of a political voice.

Back in 2007, Yebri wasn’t thinking of starting a non-profit organization; he had a vision for an event — the first-of-its-kind conference that would address the major issues affecting the Iranian American Jewish community “at a crossroads” (as per the conference flyer): namely Israel, Jewish identity, local and national politics and the genocidal threat of Iran.

In the backyard of a house in the valley, two dozen of us sat around a table for three hours and debated a name and vision for the conference. It was Eman Esmailzadeh, a young entrepreneur, who suggested “30 Years After” as a way to recognize a moment in time. After all, nearly 30 years had passed since the revolution that had disrupted 2,700 years of Iranian Jewish history, dispersing the community across the world to places like Israel, Canada and the United States.

That first conference, which took place on the precipice of a presidential election in September 2008, attracted 1,200 people, half of them Ashkenazi leaders. The speakers were high-level. The venue was stellar (The Beverly Hilton). Nearly every Jewish organization in town was a co-sponsor. And it was all put together by a group of 20-something volunteers with demanding day jobs of their own.

When one of our co-founders, Nicole Farnoush (a gifted singer), took to the stage to sing the American national anthem and then, to everyone’s surprise, belted out the national anthem of pre-revolutionary Iran (in perfect Persian), there wasn’t a dry eye among a single Iranian in the room, especially our parents. So this, they realized, is why they had sacrificed everything to escape Iran.

We’d pulled it off. And in the process, we found in one another best friends, empathetic confidants and yes, seat fillers. After that conference, most of the co-founders joined the boards of local Jewish and pro-Israel organizations. Others sat down for regular lobbying sessions with elected officials. We had the ears of heavyweights all over town, and we, a new generation, took our seat at the table.

At the end of the conference, I was left with a sense of euphoria and meaning, which I’ve yet to replicate since. There’s nothing in the world like knowing you’ve found your place. Of all the doors that job at the Consulate opened for me, meeting Yebri and other soon-to-be leaders was inarguably among the biggest and best.

Thanks to him and other dedicated board members, 30 Years After evolved from a singular event to a non-partisan, non-profit organization. The Jewish community took notice and supported us from the beginning. In 2008, we received a $200,000 Cutting Edge Grant from the Jewish Community Foundation of Los Angeles.

In the thirteen years that passed, the organization hosted three more biennial civic action conferences as well as hundreds of other events, almost always partnering with other Jewish organizations; registered thousands of Iranian-American Jews to vote; lobbied elected officials about Iran at the state and national level; launched the world’s only young leadership training program for Iranian Jews — The Maher Fellowship, which has over 100 graduates; and painstakingly created a video testimonial project to capture the extraordinary stories of Iranian American Jews, called The BenEvri Project. A Los Angeles Times profile of the organization in a 2014 print edition was headlined, “A Generation Later, Activism.”

In 2020, 30 Years After launched the Moradi Berkowitz Fellowship, a three-month public service training program that brings together young Persian and non-Persian Jewish leaders to learn about local, state and federal politics. It may have taken 41 years, but non-Persian Jews now are finding a seat at our tables.

As the former first executive director of the organization (and current board member), my favorite memories are rooted in accompanying young, burgeoning Iranian American Jewish leaders — those who still were in high school when 30 Years After was founded, but who now were pursuing civic action in their 20s — on visits to the nation’s capital for the annual AIPAC Policy Conference. There’s something about standing in the U.S. Capitol Building with first-generation Americans — the children of Jewish refugees and immigrants — that makes you feel happy to be alive.

As for the name, 30 Years After, it’ll remain unchanged, a nod to proactive remembrance and a time when we realized that after three decades in the United States it was time to thank those Iranian Jews who’d established us in this country and to move forward with intention and pride.

Through it all, Yebri stood as the tireless leader and institutional memory-holder of the organization. I’d delight when he would post videos from past conferences and events, and I’d play those videos over and over. One day, when they’re old enough, I’ll show them to my kids.

On November 30, Sam Yebri stepped down as president of 30 Years After, joking that he’d taken a cue from Palestinian Authority leader Mahmoud Abbas, who’s serving 15 years of what was supposed to be a four-year term. Though I’ll miss the frequent exchanges with my friend and colleague, the baton has been passed into the best of possible hands.

The organization will be led by two brilliant young women, Jasmin Niku, a co-founder who’s tirelessly served on the board for 13 years (and who formerly served as president of Bruins for Israel), and Arielle Mokhtarzadeh, a 2019 graduate of the Maher Fellowship and former undergraduate student president at UCLA. Jason Youdeem, who, in 2013, had a vision to create The Maher Fellowship, will serve as board chair. They’re joined by associate director Natalie Talasazan, as dedicated and amiable a staff member as I’ve seen at any organization.

And Yebri? He’s stepping down to focus on taking a seat at another table. If he succeeds, he’ll give Los Angeles something never seen before: its first Iranian American councilmember at City Hall.

Please note: this article was originally published in Jewish Journal.